Flying Fletches at the Gladstone Gaol 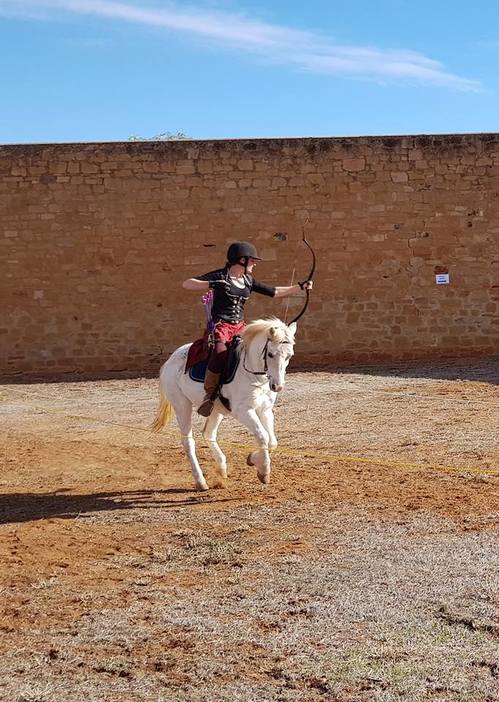 The fair was held at the Gladstone Gaol in South Australia, which was an amazing venue given all the beautifully aged stone walls and walkways weaving around the grounds.
We were there to promote our little growing club, and to show the general public what horse archery is all about to hopefully encourage some new members. We had 3 riders for this: Samantha, Kitty and Renae, with our trusty steeds: Winston, Dusty and Duck! 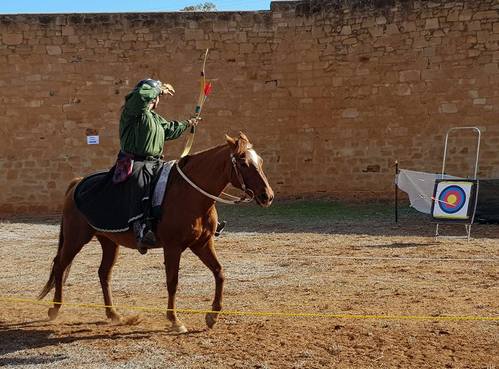 The demo went amazingly well considering it was our first ever demo (for everyone involved!). The horses handled the crowds and environment like they were just being worked in their own arenas, so we could not have been prouder. We did brief talks about what we were doing, and how to get involved with our club, as well as answering the audience's questions.

We even did a fun mini comp on the Saturday afternoon, and even though Renae had the perfect consistency, Kitty came through with a double bullseye run to take the win. With competition nerves getting to Samantha coming in last (but only by 1 point!).

We had amazing ground helpers both days, mostly from the Flinders to Coast branch, and they did an awesome job being arrow collectors/scorers/photographers and helpers to set up/pack up. We could not have done this without them, so THANK YOU! 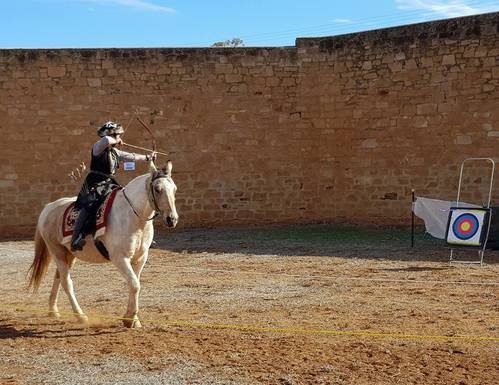 We tried to dress up in medieval styled costumes to add to the atmosphere, plus who doesn't love to dress up!

There were over 70 stalls in the Gaol, plus 5 re-enactment groups displaying various things from archery to belly dancing! Next year they are hoping to include a blacksmith, wood worker and leather worker plus loads more! Considering it was their first ever medieval fair, the organisers did an amazing job and we can't wait to see what next year brings. This event was a fundraiser for the Gaol, as they get no government funding and rely purely on visitors to the Gaol for money to keep up with repairs, so this event is a huge boost for them.

We will hopefully be back there next year (we have been invited by the organisers!!), and looking forward to the weekend of old fashioned camping, archery and horse time with a great club.

Thanks to Kate Atkinson for the great photos.