June 19th, 2017
by The Flying Fletches
0 265 420
This month's guest blog is from Mihai Cozmei, instructor and founder of Living Arrow Horseback Archery in Romania. Mihai is considered one of the top 5 horse archers in the world, and has a deep interest in traditional warrior styles of archery and riding. Here he explains the principles of Living Arrow Horseback Archery, with some great videos showing Mihai using these principles at the end. 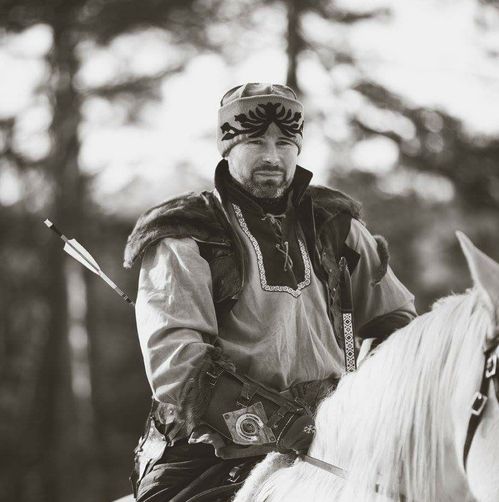 1. ABOUT RHYTHM SHOOTING
Learning and achieving the principle of rhythm shooting is the first step in horseback archery practice. "Speed shooting" doesn't exist in mounted archery; the rhythm is everything. On horseback, archery form can be performed JUST in the rhythm of the horse.

Depending on the horse type and speed, the time needed for one stride in canter is about 0.4-0.55 seconds. From horseback, each arrow can be shot at every 3rd, 4th or 6th stride of the horse, exactly during the flying phase. If the mounted archer misses this moment for loosing his arrow, he needs to wait for the opportunity of the next stride, otherwise his shot will be surely spoiled.

After choosing his favourite archery style, the archer should connect the fundamental technical elements in a few phases, putting accent on the continuity and fluidity of his motions. He needs to develop a well-balanced rhythm between the two main phases of his archery form: loading and arrow-nocking and drawing the bow-release.

For this purpose, the phases of shooting should be connected with the rhythm of the breathing, first on foot: breathing in while nocking, pressing the air inside during drawing the bow, breathing out at release ...

The success shooting the arrows in the rhythm of the breathing will be a great help for the archer to instill his form on horseback. All that is now needed is to use a proper riding technique and saddle, suitable for horseback archery practice.

2. ABOUT THE HORSEMANSHIP OF THE ANCIENT WARRIORS: FURUSSYIA
The battlefield's conditions were always very hard for the riders and for their horses. The noise of the weapons, the shouting, the adrenaline, and the presence of death were scaring and exciting them. The riding skills of the ancient warlords were supposed to be of such a kind in order to work well in all situations, with all kinds of horses. They needed the proper technique for obtaining the full trust and cooperation from their mounts, until the supreme sacrifice.

In the art of horsemanship, the riding skill should be the natural reflection of the rider's attitude toward his horse. The horse surrenders to his rider in the same conditions in which our body becomes obedient and able to follow our mind: not because he was forced, but because he was convinced to do so.

When you put the left leg in the stirrup in order to mount your horse, in reality you are going to receive a new body, incomparably bigger, stronger and faster than the 'pedestrian' one. If you don't take good care of it, the opposite will happen. All the technical elements are determined by the basic position on horseback. Beyond the external aspects, the rider's basic stance should reflect his attitude toward the horse. He must strongly accept that while he is on the saddle, he is practically in the possession of an amplified body, with the positive or negative aspects of this.

In Furussyia it is not necessary to ask the horse to do something. The rider does, and his mount follows him like a shadow of his body ... IF they are connected! The connection between the shadow and the body is the light. Between the horse and his rider is the TRUST. The rider should feel and understand the limits and weaknesses of his mount. The technical motions are not simple external signs, orders, or 'helps'. They should should always be performed together and in harmony with the horse's movements.

Through this attitude in the saddle, the rider tries to dig himself into the body of the horse like putting his hand in a glove. If he succeeds, the glove will following naturally all the movements of the fingers ... and become part of the hand.

The technical position on horseback is described in Furussyia manuals as 'half standing-half sitting', with the upper body slightly inclined in front. For achieving this ideal position, the rider needs to correctly stretch his body from the tips of the feet to the top of the head, putting half of the body weight on the stirrups, and the other half on the contact surface between the horse and the part situated immediately under the rider's seat bones.

Performing the correct technique and using a traditional shaped saddle are both necessary, otherwise it wouldn't be possible to stand on the stirrups AND place the seat bones on the back part of the saddle at the same time. Between the fork of the legs and the middle part of the saddle there should remain enough free space in order for the rider to have the possibility to turn easily his hips in all possible directions for shooting.

The feet should be pressed down and sideward on the external part of the stirrups in order to stretch the inside part of the thighs and make the contact between the rider and his mount stronger. The calves should be well contracted in order to keep the ankles in tonus ["the slight, continuous contraction of a muscle], with the heels at the same level with the stirrups.

The basin must be rotated with the seat bones pointing downward for correcting the sacral curvature of the spine, and the knees slightly bent on the same vertical line with the stirrups. In order to have the inner power running along his spine, the rider should complete his position by stretching up his neck (with the chin pulled in) and with the shoulders kept down and backward, but relaxed.

The rider's body becomes like a string on a bow, vibrating in the rhythm of his horse. Adjusting the tonus of his position, the rider can lead his mount even without using his hands. He can modify the rhythm and the amplitude of his mount's motions just by changing the pressure at the level of the contact surface with the horse.

3. ABOUT TIMING IN SHOOTING ARROW FROM HORSEBACK
During practice, the horseback archer should be able to follow the target with his upper body like the sunflower follows the sun, since his lower body is following the horse, which is his support and background.

In Furussyia riding, the rider's lower body appears to swing slightly, together with the stirrups, hanging from the hips, like during walking. In the saddle, the archer is practically 'walked' by his horse, in a rhythm of one 'double step' at every new stride. His thighs are pushed in front at each collection phase of the horse and then come back to the rear during the extension phase. In other words, the collection-extension phases of the galloping horse are naturally followed by the rider's body as well.

In the case of a fast horse, the release of the arrow should happen at the end of the extension of the horseback archer's body (drawing of the bow), and should be synchronised with the extension phase of the horse. The swing motion of the lower body is working as an impulse generator, sustaining and giving the rhythm of the upper body's dynamic. With every stride the rider's body receives a new impulse from his horse, which can be used as a start for a new technical motion. These impulses are putting in rhythm the basic phases of the archery technique, being possible to perform each one of them during every single stride.

In an ideal case, an arrow can be shot at each 4th stride of the horse:
1st stride: taking off one arrow from the quiver
2nd stride: nocking the arrow plus locking the string
3rd stride: drawing the bow
4th stride: release and grasping a new arrow immediately

When using a back quiver, the rate of firing arrows can even increase - each shot at every 3rd stride, as seen in the next video.
In order to be able to follow this model, the rider should adjust the dynamic of his body in a way suitable for shooting arrows from horseback. He needs to learn how to stretch and relax his body in a rhythm compatible with his rate of fire and with the speed of the horse.

It is comparable to the dynamic of the rider's body during the rising trot. In this case, the rider's pelvis is rolling to the front of the saddle (till reaching the position of standing on the stirrups) at every second step of his horse. During this phase, he stretches his body slightly, followed by relaxation while he sits back again during the next phase.

On cantering the horse, the archer needs to increase the stretching of his body in the moment when he takes the arrow from the quiver and also when he starts drawing the bow. The relaxing phases are during nocking and release.

In the final video, five shots were performed in seven seconds along a 90m long track. The targets (50x50cm) were placed at 9-10m distance from the track and 18-20m distance from each other.